What is difference between OLS and MLE?

OLS and MLE both estimate a model made up of parameter estimates that describes the relationship between two or more variables. Most of time we are interested in a point estimates, or the mean impacts of some random variable X on outcome Y in the population, and the uncertainty around its mean (often referred to as Greek betas, sigma, etc.). A fundamental problem for all model estimates and methods of deriving them is that the population cannot be fully observed in most cases. If it were, statistical methods would not be needed. Estimates, regardless of how they were derived, instead approximate relationships in the population using samples.

The three primary estimation techniques above could also be technically applied to an infinite different number model types. Selecting a model and its estimation procedure should be based on the question we are asking, the observations available, and most important the the process that we think generated them (linear, binomial, poison, mixed etc.), along with some more formal comparisons of fit and explanatory power which I’ll discuss below in 1b.

Consider your hired by a regulatory agency to studying the effects of local commercial fishing activity on fish stocks and endangered species impacts. We are concerned with the effects of fishing effort (# of sets) on three outcomes–the number of fish (lets say tuna) caught by the fleet, whether or not they caught an endangered species, and specifically how many endangered turtles were caught. For this we are given a sample of daily data on the number of nets set by the fleet, and corresponding numbers of tuna caught, an indicator of whether an endangered species was caught, and how many of those were turtles. We assume that activity is fully observed, and measured correctly.

The sample is as follows: 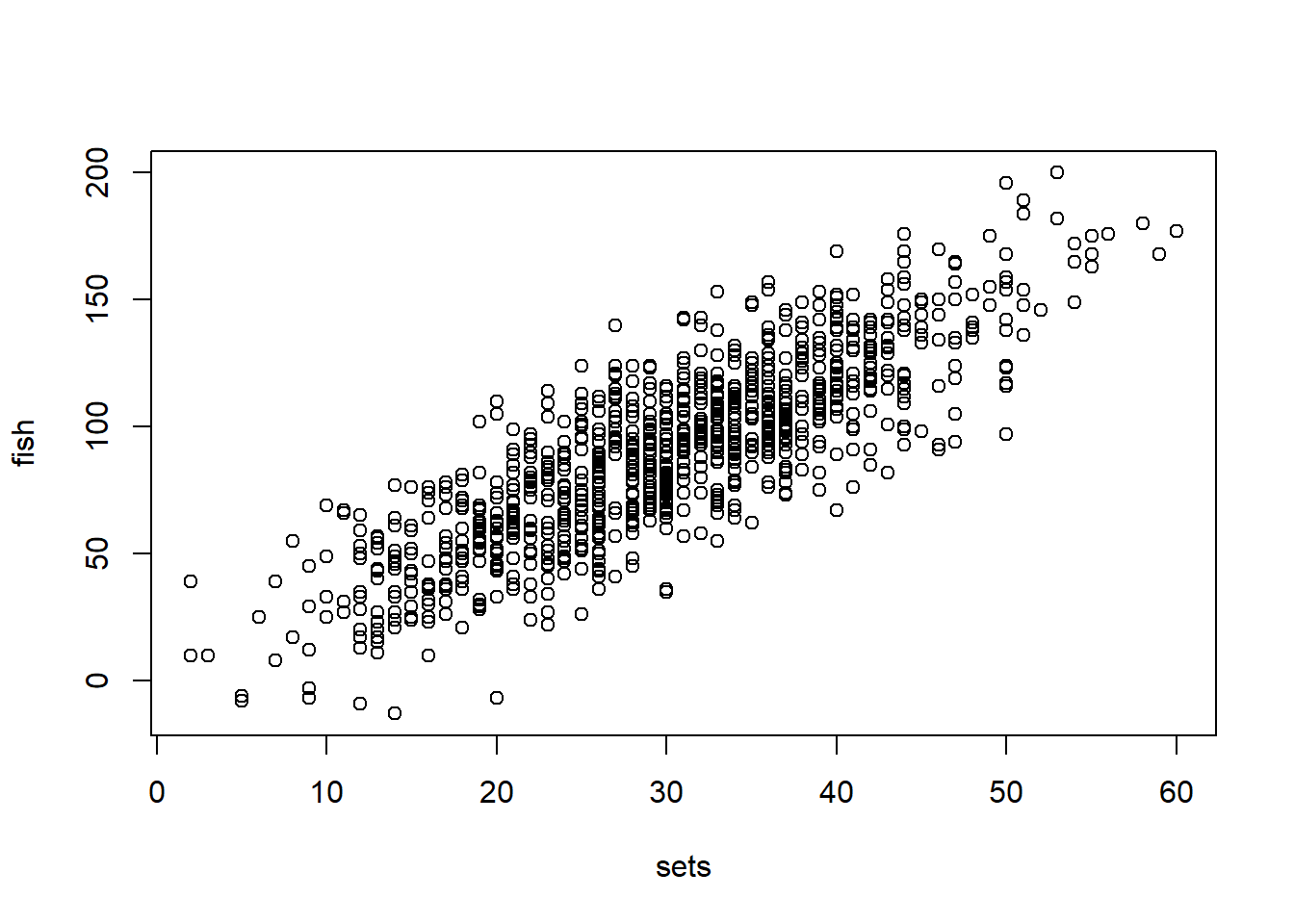 There is a clear relationship between the number of sets made and fish caught (because we made it that way, but still). Now we want to estimate what that actual relationship is, or the effect of x- sets, on Y fish caught. The relationship appears linear, and continuous, so we can propose a linear model which I estimate below using OLS and MLE:

I’ll show this in as much detail as possible using scalar algebra:

Performing a MLE by explicitly defining parameters for the linear model:

Technically, we could start plugging in a bunch of guesses into our function until we find the combination that give us the highest likelihood of producing Y. The function and and optimization algorithm we run after this minimizes a negative likelihood, so in this case the smaller number corresponds to a higher liklihood #e.g. the log liklihood of intercept=1, beta=5, and sigma 10 is:

And the log likelihood when intercept=1, beta=5, and sigma 10 is:

Note that the parameters found by OLS and ML approximately found the same values even though they are fundamentally different techniques. This is because the the assumption of the OLS model were written directly into the ML function. In this way the technique you use is irrelevant. The better question is whether the assumptions hold that make OLS or it’s ML counterpart the best linear unbiased estimator (“BLUE”) of the population its drawn from. That is:

Practically some books categorize this simply as “the linear model describes the data”, or is the appropriate model. If not, the assumption is violated.

From a practical standpoint we are assuming that treatment in our sample is as good as randomly assigned, after conditioning on observable traits that might affect treatment and outcome–hence the term “the effects of X1 on y after controlling for/conditioning on x2…xn”, or after controlling for the probability of selection into treatment brought on by xn. This can take on a few different forms. Most obvious (to me) is when a variable is left out of the model that effects both x and y, knows as omitted variable bias, the direction of which depends on the +/- relationship between x and y and x and the omitted var. Other forms of the problem include autocorrilation between a variable and itself across time and space, and simultaneity which occurs when levels of x are determined bY the outcome, which is often the focus of spatial and temporal lagged variables, and instruments (to identify independent variation).

Its nearly impossible to satisfy these assumptions exactly, but we could conclude they fit our example reasonably well. The assumption most likely violated is uncorrelated errors. The number of sets made is likely corrilated with the size and technology of a fishing vessel, as well as the expertise of the fishermen. If higher set days are positively correlated with some other technical advantage, and that technical advantage leads to higher catch the coefficent on sets will be biased upward, when its really technical knowledge driving fishing outcomes. Importantly, this would be an identification issue with any model type (without collecting more/different data), so OLS is still appropriate.

When OLS is not best

But what about when the data generating process is non-continuous, errors are not normal etc. such that conditions become violated. In this case a linear model is not likely to be the best fit to the data, and is certainly not un-biased.

Consider the same example above, expect the agency next asks you to estimate the impacts of sets on endangered species impacts. Now we are concerned with the effects of fishing effort (# of sets) on whether or not they caught an endangered species, and additionally how many endangered turtles were caught. As before we are given a sample of daily data on the number of nets set by the fleet, and an indicator of whether an endangered species was caught, and how many of those were turtles. We again assume that activity is fully observed, and measured correctly. 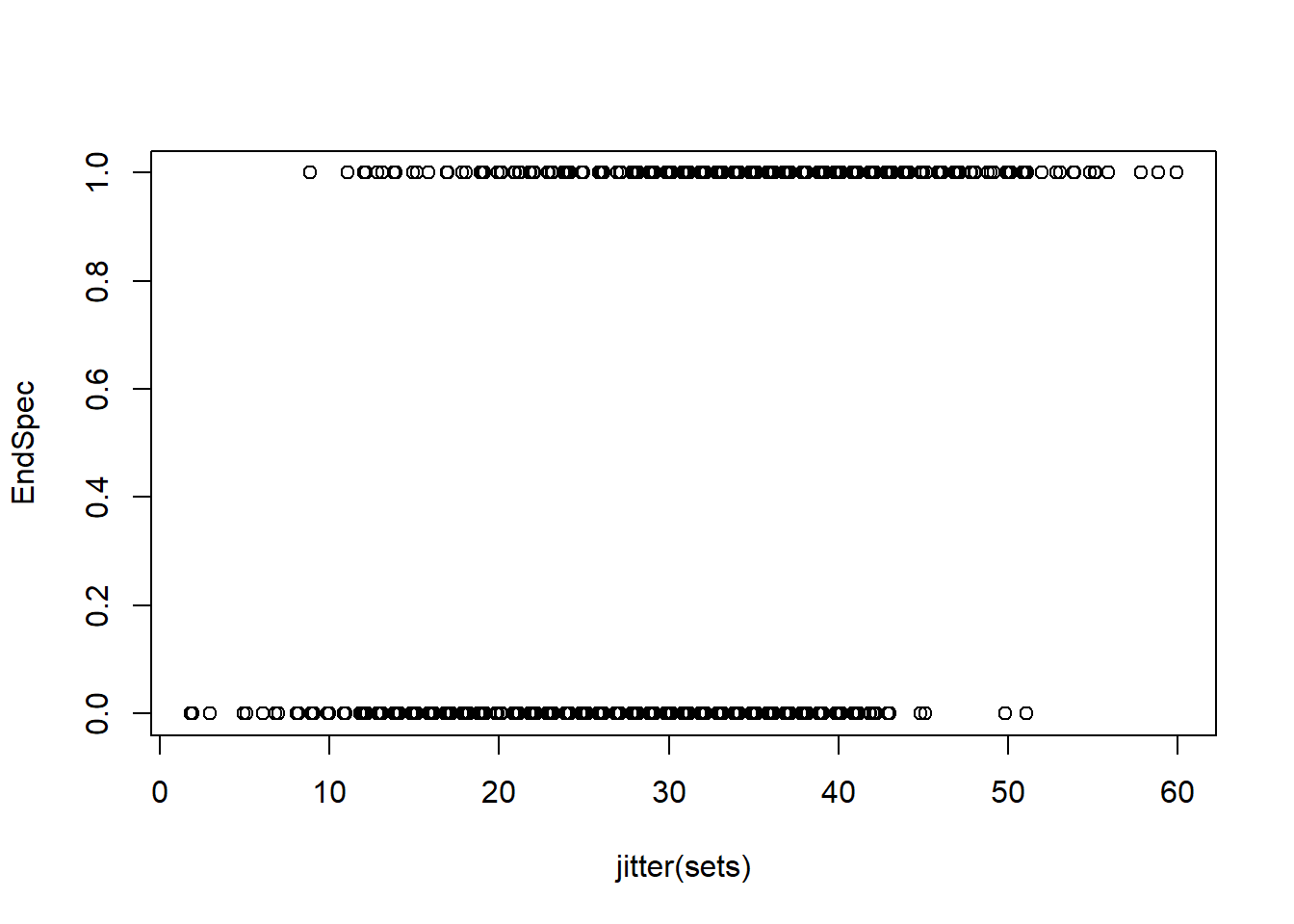 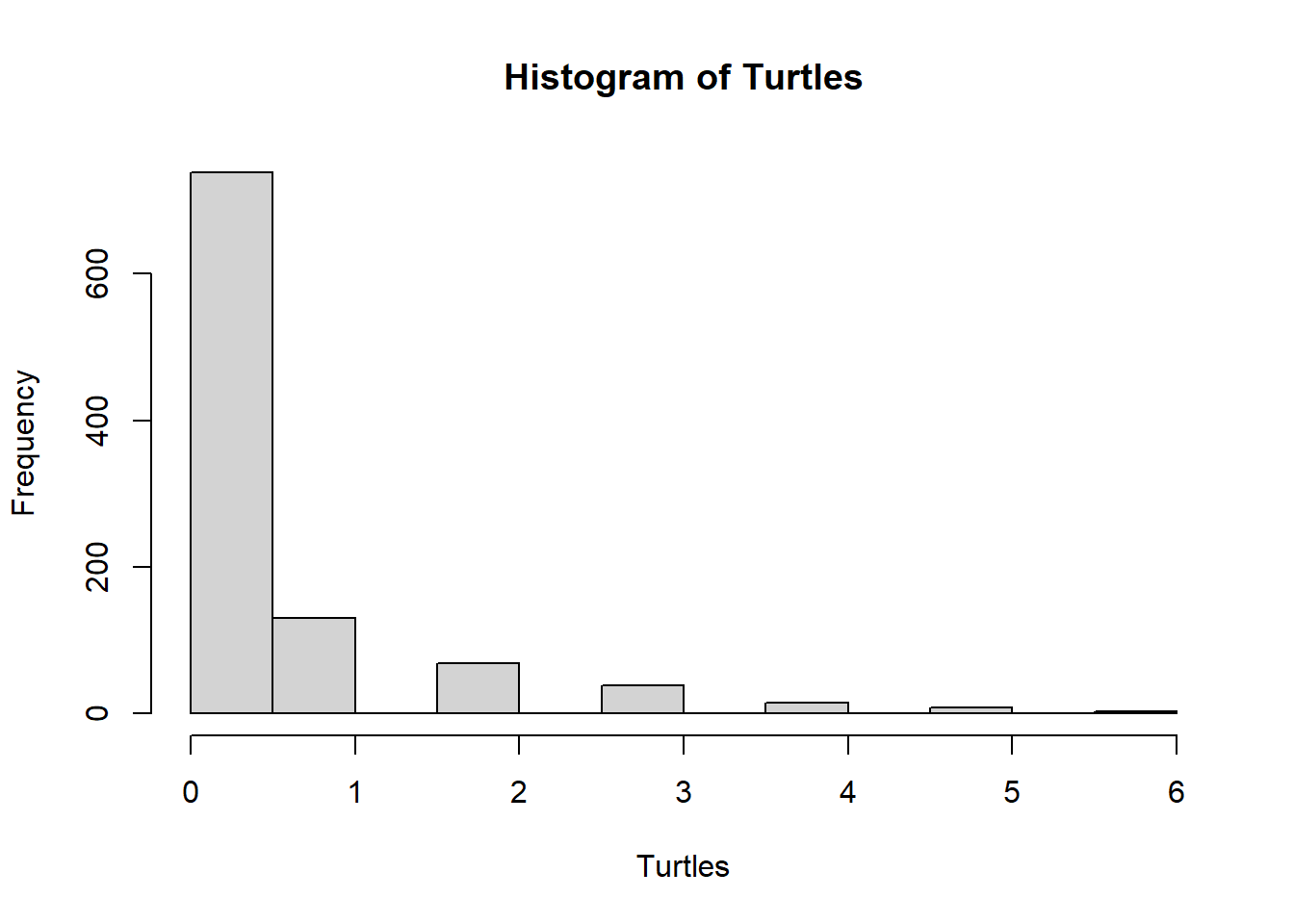 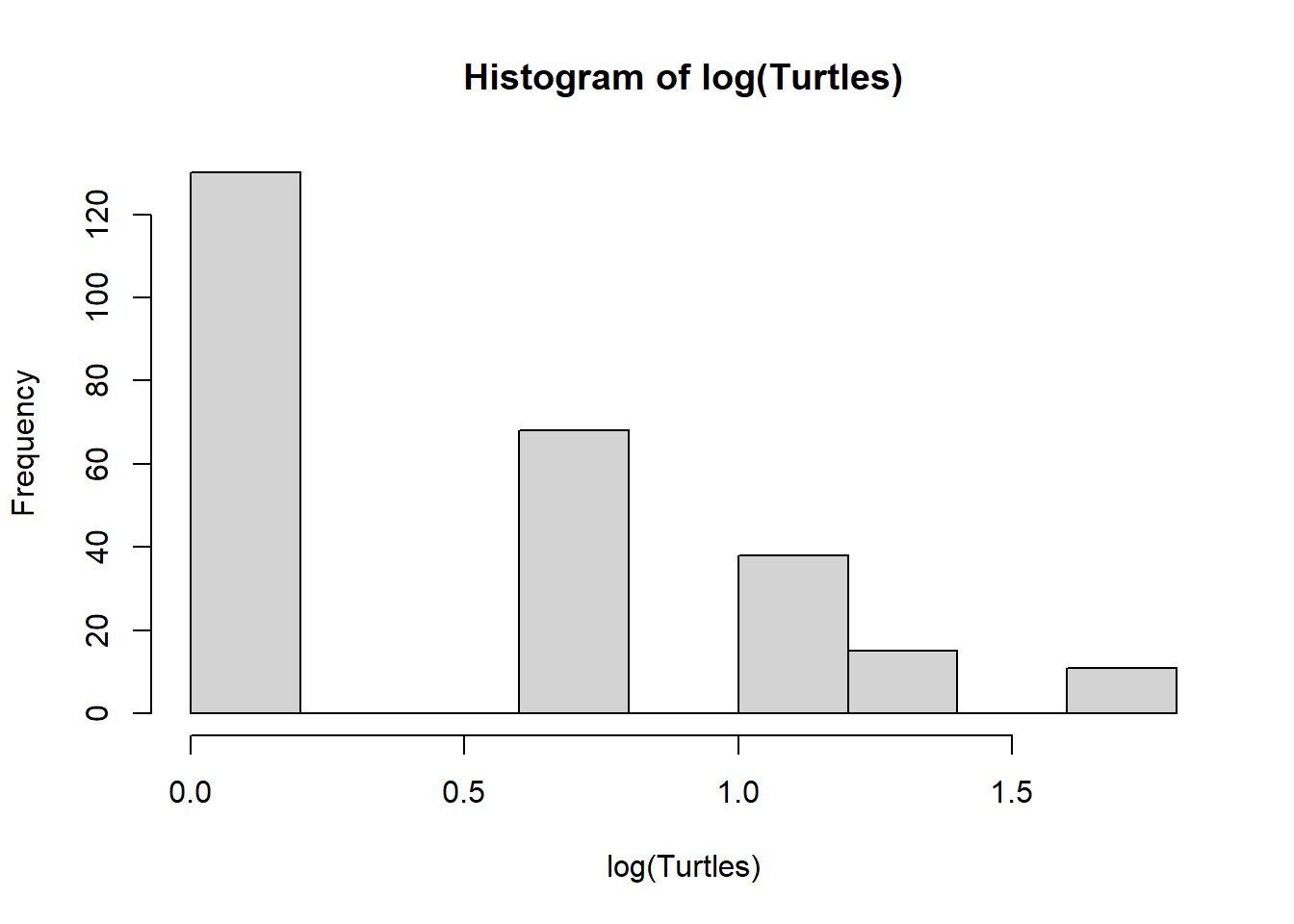 We could consider linear models, but its quickly obvious a linear model will estimate nonsense values 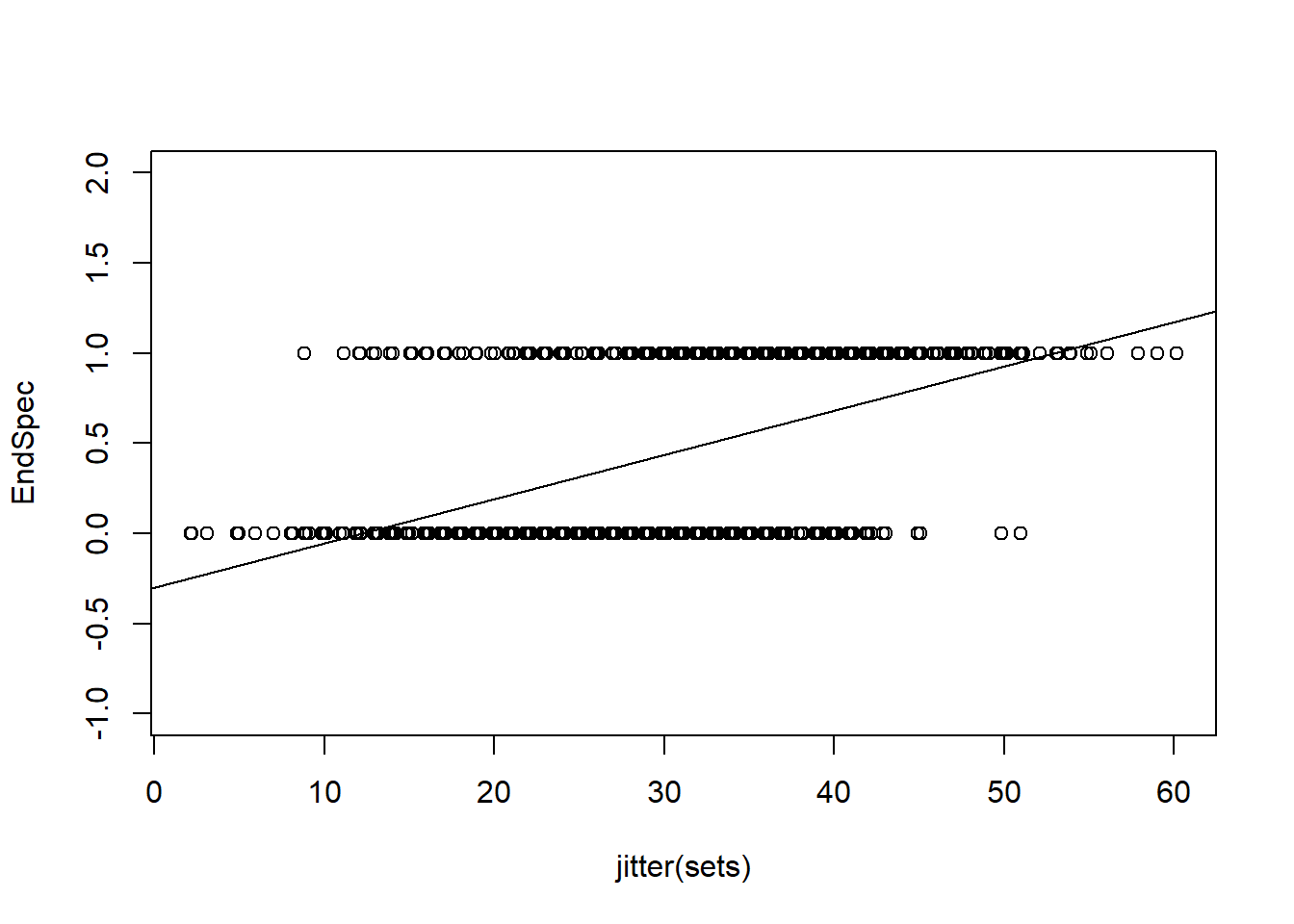 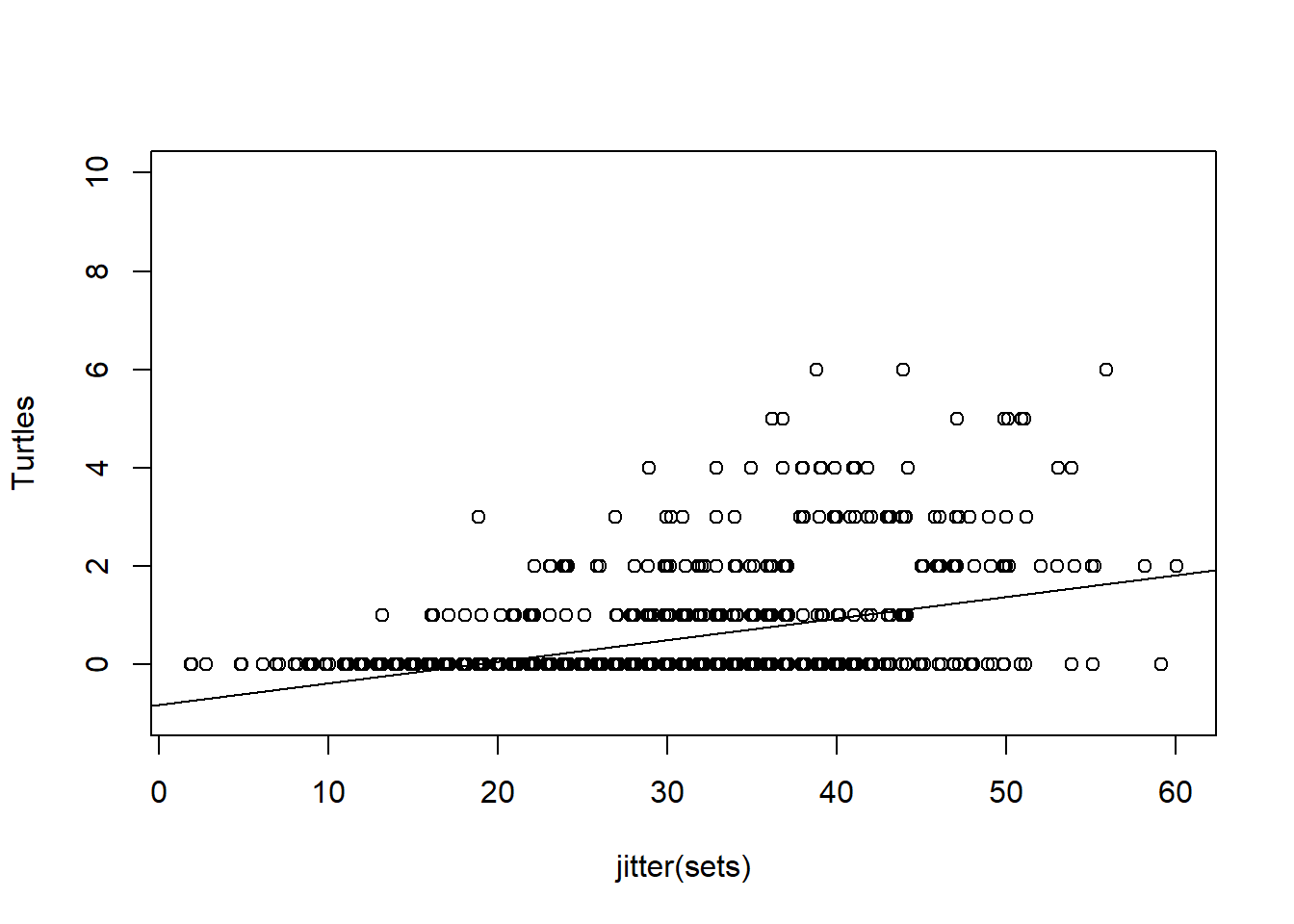 And that residuals are not normal, zero mean, homoskedastic etc.. 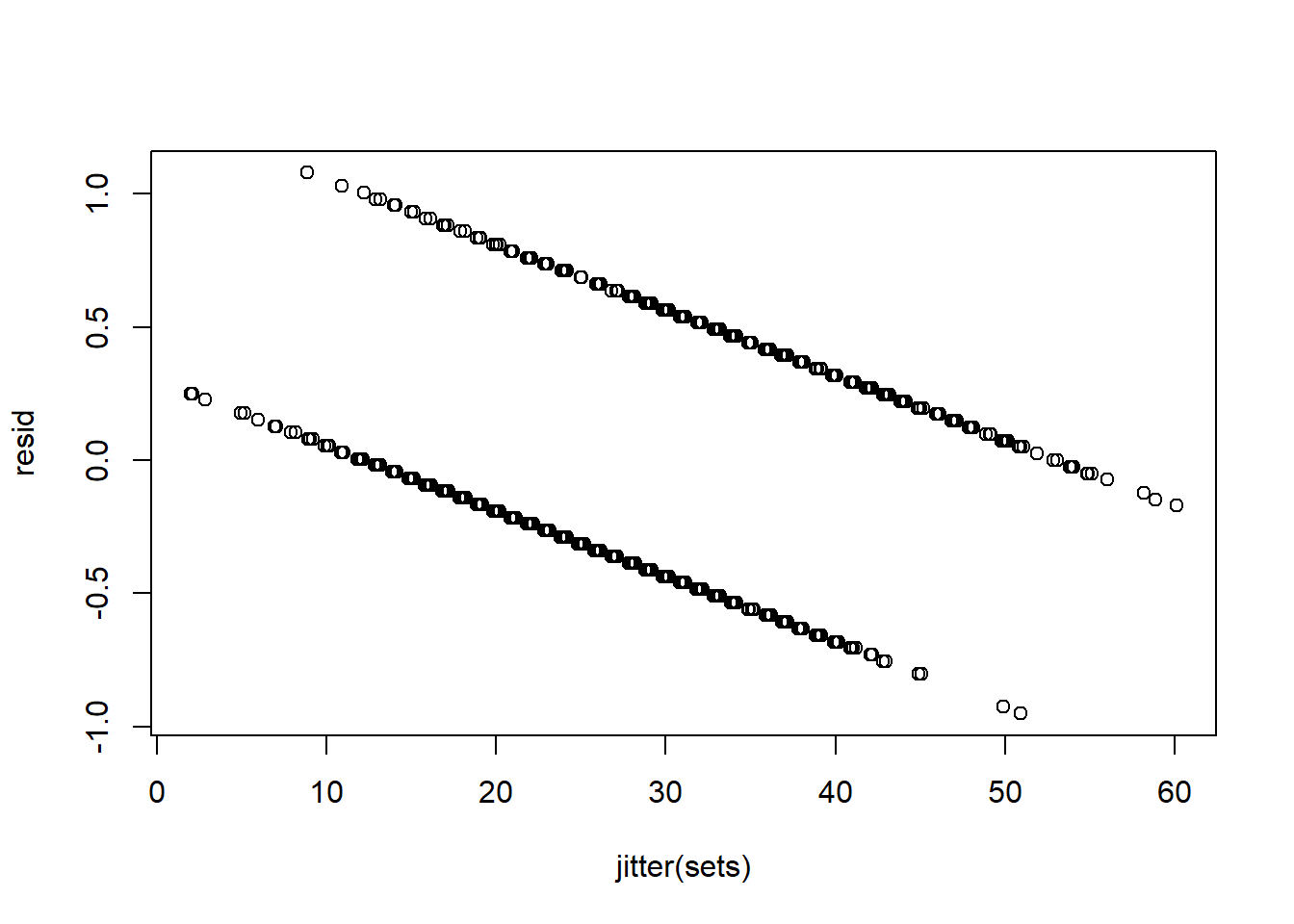 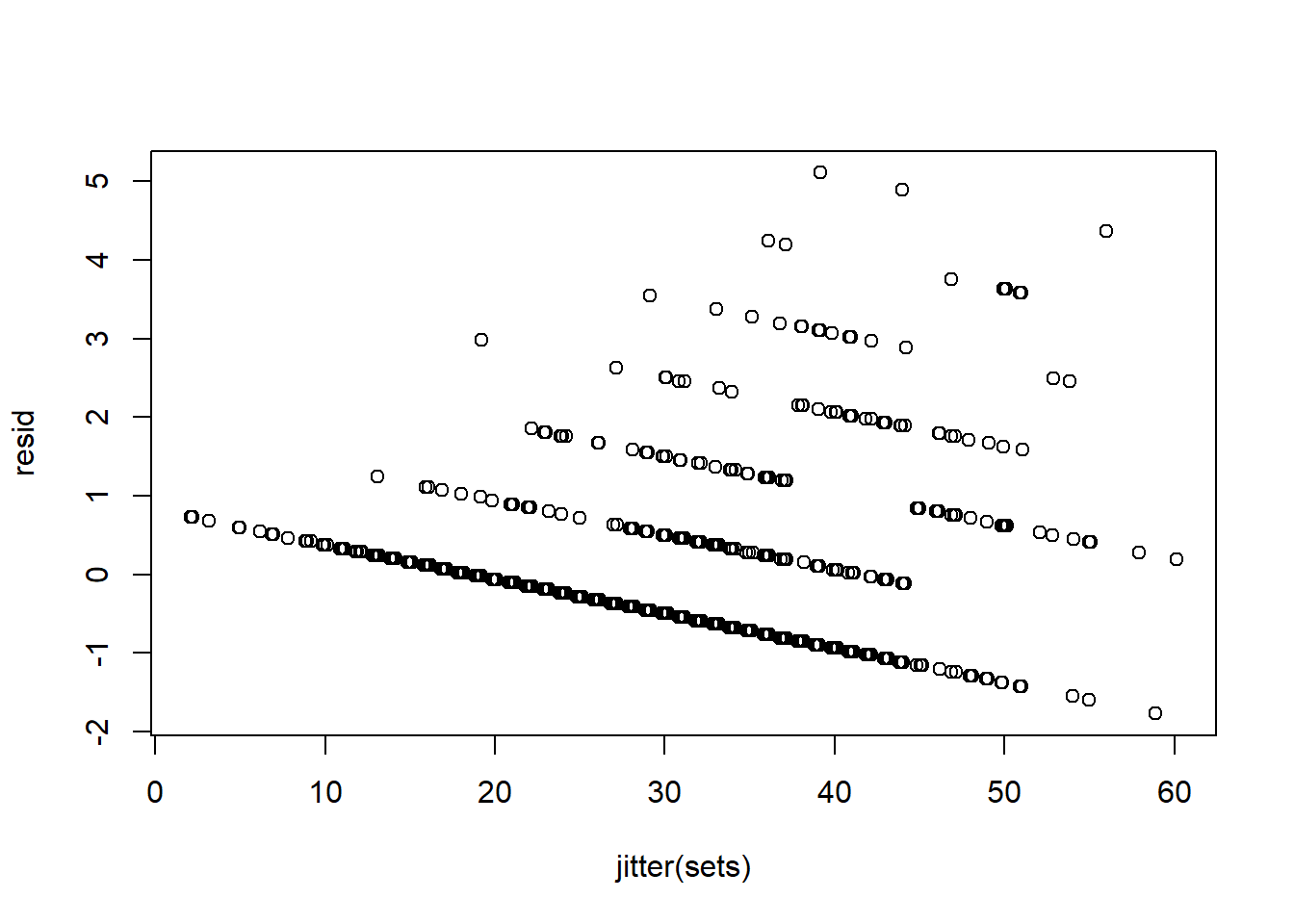 Once we determine that OLS is not the BLUE, and risks giving nonsensical predictions, we can look to other models that map x onto y in a way that is more consistent with the generating process. The following fit alternative models.

Instead of estimating a linear model through points about 0 and 1, the Probit model allows us to fit a function to the log odds of y: \(log(P(y=1| x)/P(y=0|x))\) , the log of the probability that y=1 divided by the probability y is 0. The new scale of y is said to be the “latent”, or unobserved variation in Y and is now continuous between -infinity & infinity. Another useful property is that when the odds of y given x is 0.5 (e.g a toss of a fair coin), the log odds =0 such that any value above 0.5 is positive and any value lower than 0.5 is negative. That is, instead of the effects of X on Y directly, I am now concerned with whether X affects the odds of observing y beyond an unconditional coin toss, and by how much.

This is technically the conclusion of the binary response/latent variable model…but thinking about changes in log odds is pretty cumbersome. More useful is to report the expected probability of y back on a 0-1 scale, which can be derives by applying an inverse function to the coefficient (distribute back to th RHS of the equation). Plugging in values to the inverse logit gives us the usual “s curve” that describes the predicted probability of y given x.

Importantly, we can no longer generate predictions above 1 or below zero, and the effects of x on y are not linear. That is, the value of beta varies across different intervals of x, and by construction, different levels of other covariates if in the model. 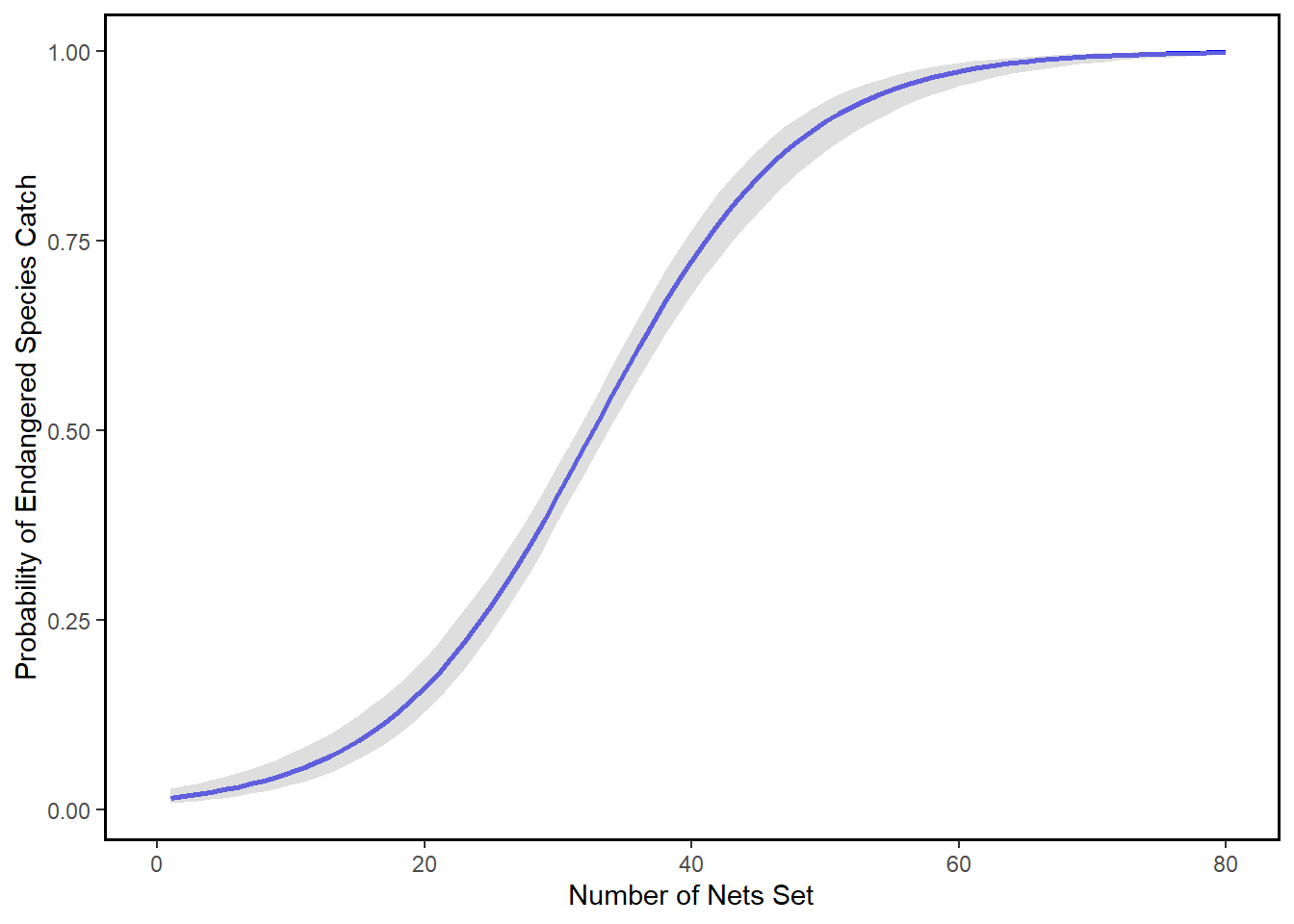 Note again that x number of nets sets by fishermen correspond to some probability of catching an endangered species. For example, when 20 nets were cast:

We might conclude that this is reasonably low, but we know that 0.16 is not the constant effect of the next 20 sets, so it might not be a good idea to let the fleet add another 20. To be sure, in increase in probability of catching an endangeres species going from 20 to 40 sets is:

Which is a much larger jump, and important more likely than not (>0.5). We can set the log odds to 0, and see that any number of nets allowed above

Will give us a probability >.5 and might be a starting point for negotiations in the fishing community.

Predicted Turtle Impacts (Count Dependent Var) If we are concerned with zeroing in on turtle counts in particular, the binary response model is not helpful, and the OLS estimator is still bias. Instead we might choose a poisson model whos assumptions about the distribution of y are more consistent with our data. Here we assume that that y >0, can range above 1 and has a variance equal to its mean. 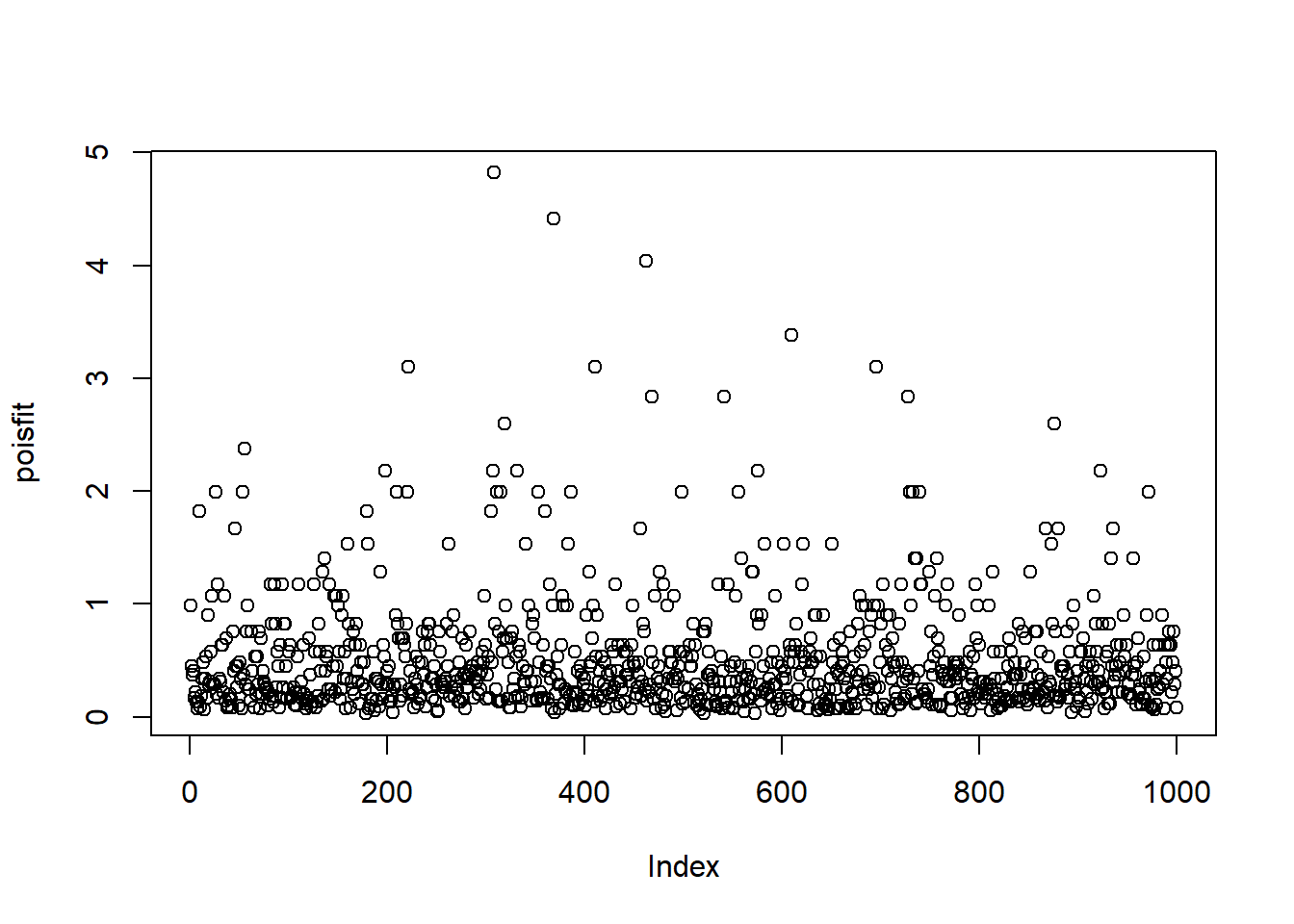 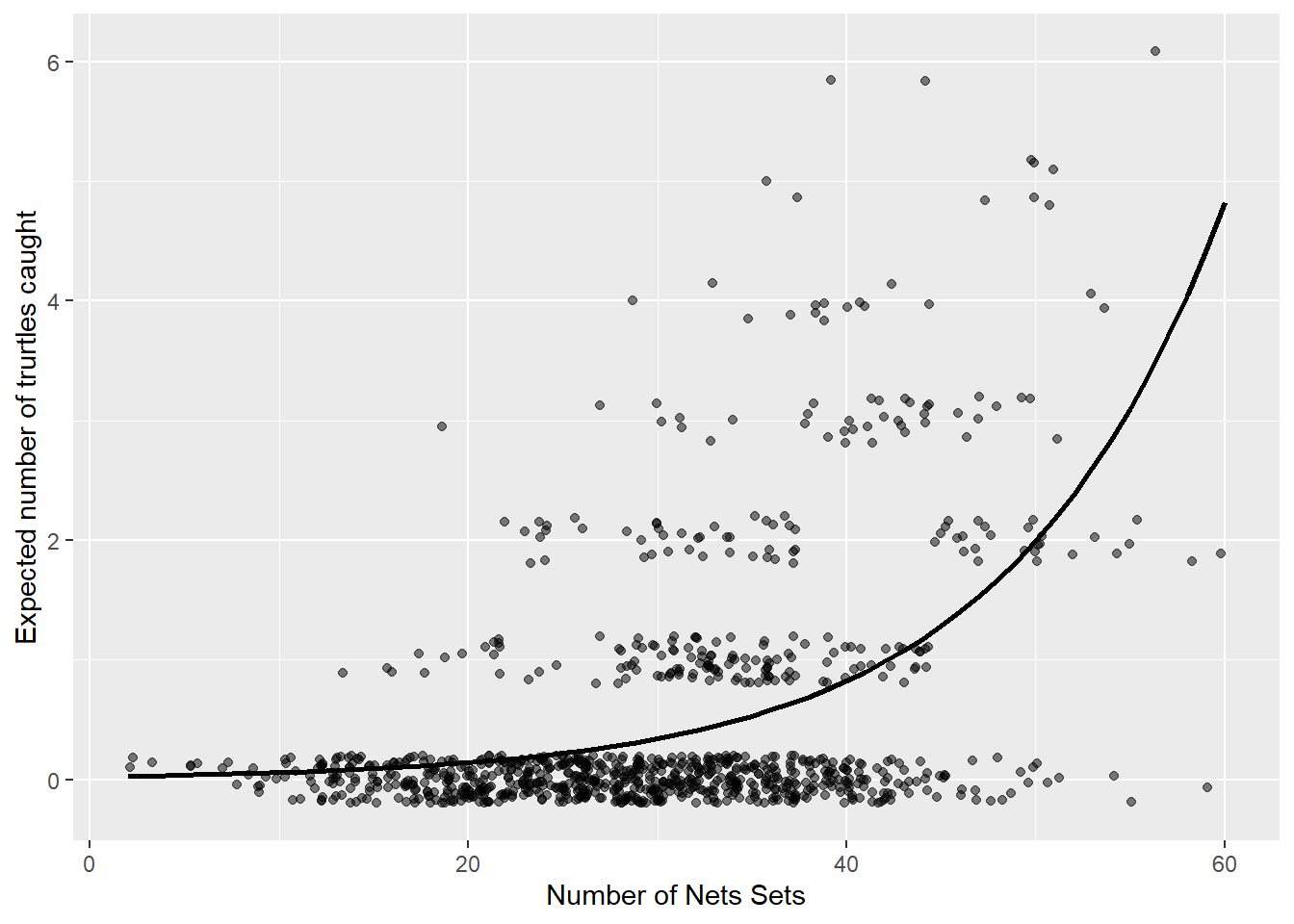 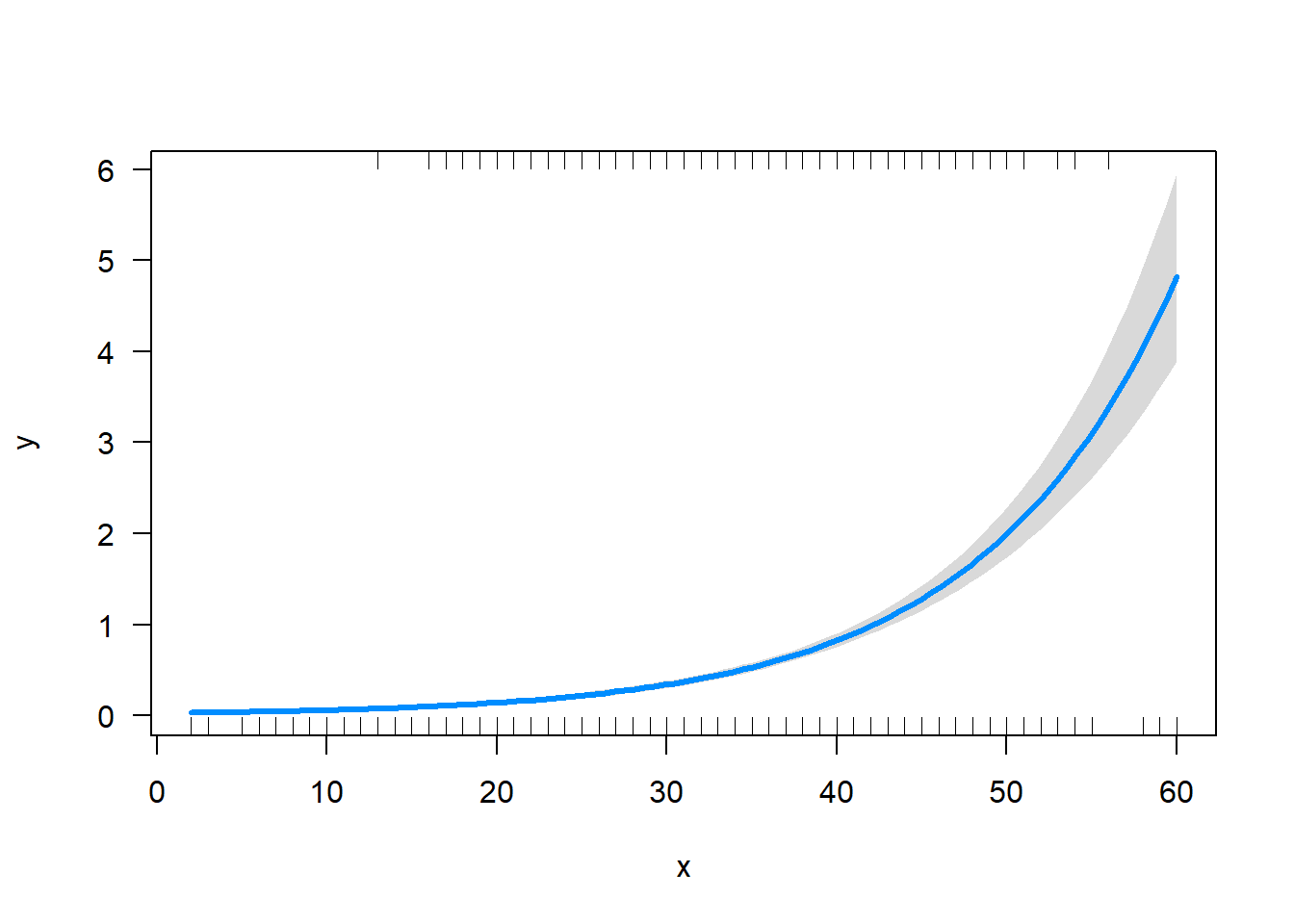